The Directors
Team Magic is co-owned and directed by Faye Yates and Joe Fleenor. Fleenor and Yates are USA Triathlon Certified Race Directors and have served on regional and national committees. Team Magic is one of the nation's largest full-service Professional Multisport Event Companies. 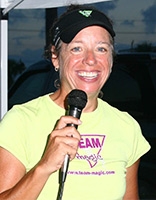 Faye Yates received her Bachelor of Engineering from Vanderbilt University in 1989, starting her career in Birmingham working with United States Steel. In 1995 Yates started working with Team Magic part-time, transitioning to full-time in 2002 with a focus on expanding the Tennessee races.

When not organizing events, Faye also enjoys running with her dogs and fits in some racing, including triathlons, duathlons, marathons, half-marathons, (and one Ironman Triathlon.) Faye also serves on the Advisory Board of Directors for Girls On The Run of Middle Tennessee. 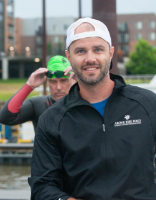 Joe graduated from the University of Tennessee majoring in Sport Management and has spent his entire professional life in the sport and event production business.  His first love was tennis, where he spent seven years working with the United States Tennis Association (USTA) in helping run local, state and regional tournaments and providing growth consulting services to tennis clubs, independent teaching professionals, parks and schools.  After leaving the USTA, Joe moved into corporate event production, serving as Director of Events & Client Relations for The Rainmaker Companies, the leading training and consulting firm working with accounting firms across the globe, before launching Above The Fold in 2016.

The Founding of Team Magic, Inc.
Therese Bynum conceptualized Team Magic in the 80s when she owned and managed the Magic City Tri Shop in Birmingham. A racing team was established to help her organize and promote races in the budding sport of triathlon.

Yates moved to Birmingham for her first job post-college and met Bynum when she bought her first tri bike at the shop. The two combined their educational backgrounds in exercise and engineering management and personal interests in multisport to unfold what Team Magic, Inc. is today.

Over time, the racing team evolved into a group of leaders that reside in Birmingham, Nashville, and Chattanooga and serve to help Therese and Faye produce some of the most respected races in the southeast. Therese retired from the company in 2020, yet will still be at many races, likely with a PA system microphone in her hand.

Current Operations
Team Magic is now based out of Nashville, TN. While triathlons are the main focus and make up the majority of the events, Team Magic also manages duathlons, running events, and cyclocross. Team Magic has worked with several running events, including the Marathon Olympic Trials hosted by the Mercedes Marathon and the JP Morgan Corporate Challenge in Chicago. Team Magic was appointed as race management for the 2007-2008 USA Triathlon National Collegiate Triathlon Championship. In 2008, Team Magic served as race management for the Tuscaloosa Tri-Palooza which included the Men's and Women's Olympic Trials Qualifier for the Beijing Olympics. Several Team Magic events have been chosen as the top destination races including the Mountain Lakes Triathlon, Alabama Coastal Triathlon, Kaiser Coastal Half Marathon, and most recently Chattanooga Waterfront Triathlon. Team Magic regularly receives the honor of hosting championship events for USA Triathlon, including regional championships, national championships, and world championship qualifiers for the states of Alabama and Tennessee.

Team Magic Growing With The Sport
In 2001, Team Magic began expanding into Tennessee with the Powerman Tennessee Duathlon. In 2002,  the first Tennessee triathlon was added and has continued to grow in the Nashville area. In 2005 Team Magic joined a partnership with the Chattanooga Track Club to bring new life to the long-running Chattanooga Dam Triathlon, which is now one of the premier and largest triathlons in the southeast. In 2006, Team Magic took ownership of the 2nd oldest triathlon in the country, the Music City Triathlon, which relocated in 2009 to the heart of downtown Nashville.

In 2007, Team Magic developed a partnership with the Alabama Gulf Coast Sports Commission to develop the Alabama Coastal Triathlon, which is now one of the most successful events on the calendar. With the same partners, a half-marathon weekend takes place the Saturday following Thanksgiving in the same area of Orange Beach and Gulf Shores, Alabama.

Running Events Added
Team Magic also holds more running events in addition to the Thanksgiving weekend Coastal Half Marathon and 5k. Look for the Music City Half Marathon, 10k and 5k in downtown Nashville in March, and a holiday run with the Mt. Juliet Christmas parade, just outside of Nashville, in December.

The Team Magic race calendar now extends from the Gulf of Alabama to metro Nashville. Events start in March and end in December.  A lot of good times, fellowship, and many reasons to make lifestyle changes that benefit not just oneself...also the many charities we support.